Many of our remaining sacred sites will be under water. This is ongoing cultural genocide.
—Caleen Sisk, Chief, Winnemem Wintu Tribe

The U.S. government is pursuing a huge northern California dam construction project, which will result in cultural harm and ecological disaster.

Support legal action by the Winnemem Wintu tribe to stop the Shasta Dam Raise— funds will cover the cost of legal representation and expert testimony:

When Shasta Dam was under construction (1938-1945), a vast landscape north of Redding was destroyed to make way for California’s largest reservoir. Winnemem Wintu tribal lands were taken, clearcut and burned. Promises to provide replacement lands were never fulfilled.

No fish passageway was built, and Chinook salmon—the state’s greatest food fish—were blocked from spawning grounds in the cold waters of the upper Sacramento, McCloud and Pit Rivers.

Because of Shasta Dam, the Winnemem have been exiled from their ancestral lands, and the winter-run Chinook salmon are now
an endangered species. 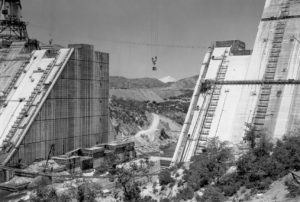 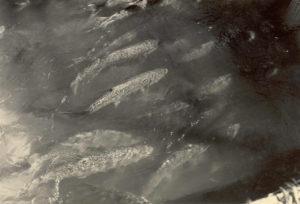 The U.S. Department of the Interior proposes raising the height of Shasta Dam by 18.5 feet, flooding several more miles upriver. The project is estimated to cost $1.5 billion. Congressional approval and funding appropriation is required.

The enlargement of the dam would enable the Bureau of Reclamation to provide more water during wet years, primarily for the benefit of large agricultural landholders in the southern Central Valley who already receive subsidized water from Shasta Lake.

The need is questionable, based on the small number of years when the existing reservoir reaches capacity, and the fact that California water use has been declining, thanks to conservation and improved efficiency.

These threats are exacerbated by higher regional water temperatures resulting from climate change. 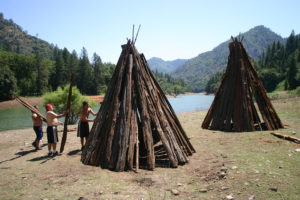 Previous losses have already devastated Native American subsistence and cultural traditions. Despite their history of being forced off McCloud River lands, the Winnemem Wintu continue to perform ceremonies along the river, as they advocate for the salmon and for righting the historic wrongs that denied access to their sites for hunting, fishing, gathering and important traditional rituals.

The State of California is not likely to contribute to the costs of the project, as the enlargement of Shasta Dam would inundate miles of the lower McCloud River and its unique wild trout fishery, protected under the California Wild and Scenic Rivers Act. The state recognizes rights of the Winnemem Wintu Tribe, ignored by the federal government.

Reviewing the draft reports as required under the Endangered Species Act, U.S. Fish and Wildlife Service biologists concluded that the proposed project would negatively affect salmon. For the project to proceed, a permit from the USFWS is required. One of the fears expressed by environmental opponents of the proposed dam raise is that the USFWS will issue a permit in defiance of the findings of its own scientists.

A bigger Shasta Dam endangers fish, the fishing industry, a wild river, and native culture. So who benefits?

A primary beneficiary is Westlands Water District, representing a handful of politically connected agricultural landowners in the Central Valley. The current Acting Secretary of the Interior is Westlands’ former top lobbyist. Westlands is now the lead agency conducting the Environmental Impact Report for the proposed Shasta Dam raise.

If landowners can’t use all of their taxpayer-subsidized water, they can resell the extra water to developers, cities and energy companies. Even as these farmers clamor for more water, thousands of acres have been forced out of production as a result of destructive irrigation in their desert environment, which has led to sinking soils and rising levels of salts, selenium and toxic minerals that threaten bird and animal life.

Even after the 2017 failure of Oroville Dam—weakened by floods and earthquakes due to reservoir-induced seismicity —the Bureau of Reclamation wants to increase floodwater pressure on 75-year-old Shasta Dam.

The cost of a dam raise comes with a potentially high political price. During an era when dams are coming down and aboveground water storage in large reservoirs is increasingly criticized as outmoded, inefficient, and dangerous, representatives in Congress will face public outcry if tax dollars are appropriated to this boondoggle.

What should Congress do?